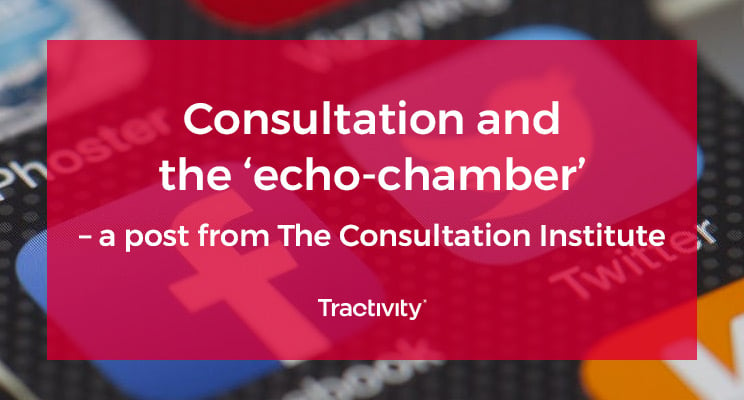 Sign up now to receive a free 1-on-1 demo of Tractivity, delivered by a member of our expert team.

When people stop listening to both sides of the argument

Social media is posing some real challenges for those who want to promote an open, transparent debate and evidence-based policy-making.In theory, a better-informed citizenry should have been good news for democratic discourse.

The trouble is, as every reader knows, the sheer volume of messages, even from those we regard as friends, exceeds our capacity to read and absorb, so we all naturally search for ways to prioritise or filter what we see.

The result is that we screen out those views we have no appetite to hear, and ultimately only see views with which we broadly agree.  At the same time the application provider, keen to sell us advertising, finds ways to show us only those offers that might interest us. As a result, the breadth of information we are shown online is being technologically narrowed – filtered by algorithms and tailored by our increasing power to shape the news we see.

The conclusion is that some people – not all – hear the news that they want to hear. Their existing perceptions are reinforced; their information base is less likely to be broadened by anything that challenges their assumptions. It is called the echo-chamber. Talk to your online community of friends or acquaintances – and if they respond, you will hear much the same views as your own. Hence the echo. And experience shows that we are much more inclined to believe what our self-defined community tells us. Even if it is untrue.

Very solid USA research from the Pew Research Center tells us that a majority of the public finds political content on Facebook or Twitter very stressful and dislike it. Many people find the tone of the social media debate uniquely angry and disrespectful. Pew found that about one-third of their user sample say they have changed the settings in order to see fewer posts from someone in their feed because of something related to politics, while a quarter have blocked or ‘unfriended’ someone for that reason. We also know from UK research (Demos) that people with more polarised political affiliations tend to be more inward-facing than people with more moderate political affiliations, and that therefore the further the group is from the centre, the more pronounced is the echo chamber effect.

Despite this, for all the tensions and annoyances that accompany political debates on social media, some users see a good side to these interactions – particularly those who indicate a high level of interest and involvement in the political process as a whole. But how many such people are there? Research evidence is thin, but a fair estimate is that roughly 20% of social media users would be classed as interested in current affairs, and are happy and willing to engage in the online debate. That is a huge number and far exceeds the 3-5% typically thought of as active citizens. It also dwarfs the 1% who may actually participate in public consultations. It is this group – maybe one-fifth of the population- who take part in debate and it is these people that are beginning to be deaf to the views of others.

This has serious implications for public consultations:

Most important may be the need to turn the tide away from the idea that complex issues lend themselves to simple solutions. Supporters of direct democracy claim that one-man, one-vote is clearly a more egalitarian way of taking decisions than letting just the educated elites decide. But it is prone to simplistic, sloganised, emotion-based answers to absurdly difficult issues. And the electorate is perfectly capable of taking wholly contradictory decisions, making good administration all but impossible.

In many ways, the public consultation is in the front line of the fightback against dumbing down politics and evading complexity. Done properly – an important caveat – it offers everyone a level playing field upon which to argue their case. Zealots pushing for particular solutions with the certainty of the convert and blind to the drawbacks of their plans will fight against the wider scrutiny that consultation might bring. That’s why it has never been more needed.

Rhion Jones is considered a leading authority on Public Engagement and Consultation. A founding Director of the Consultation Institute, he is a co-author of “The Art of Consultation” – still the only major book on public consultation, and has delivered over 300 training courses and Masterclasses. He is a prolific writer on the subject, having written over 300 different Topic papers and over 20 full Briefing Papers for the Institute. Since 2003 over 12,000 person-days of training based on courses he invented have been delivered. Rhion is in demand as an entertaining Keynote Speaker and Special Adviser, particularly on the Law of Consultation, and its implications for Government and the NHS.

You'll be automatically subscribed to our newsletter.